The 2019 Edelman Trust Barometer surveyed 1,150 people in Ireland to gauge respondents’ trust levels in and attitudes towards business, NGOs, the media and the political system. It is part of a global survey, now in its 19th year, which surveyed more than 33,000 respondents across 27 markets.

The Barometer’s Irish findings revealed on Thursday, 7 February show that the Irish population expects CEOs to take the lead on change rather than waiting for government to impose it. The findings also show that CEOs can create positive change on issues such as equal pay, the ending of discrimination, improving the environment and job training. The belief that companies should benefit society as well as being profitable is now ‘the new normal’ for businesses.

The pay-off for businesses that meet these expectations and achieve high levels of trust are employees who align their identity and thinking with their employer and who are far more likely to advocate on their behalf. This employee advocacy includes recommending a company’s products and services but also extends to championing their employer as a place to work.

71% of respondents said that it was critically important for CEOs to respond to challenges – ranging from industry issues, political events, national crises and employee-driven issues.

Respondents identified that CEOs can create positive change in all of these areas: equal pay (72%); training for the jobs of tomorrow (67%) and making positive changes to overcome challenges such as prejudice and discrimination (66%) and sexual harassment (62%).

75% expect CEOs to take the lead on change rather than waiting for government to impose it – an increase of 12 points on the previous year.
The 2019 Trust Barometer also shows a massive increase of 17 points in news engagement on 2018 among the general population, with 65% of respondents engaged.

“This year’s Irish findings show that trust levels in traditional media remain high at 62%, while at the same time trust in social media remains low at 27%. Overall, the 2019 Trust Barometer shows far higher levels of news engagement than in 2018, as concerns over the use of fake news and disinformation remain prevalent,” commented Joe Carmody, Managing Director, Edelman Ireland.

69% of respondents said they worried about false information and fake news being weaponised, with just 27% trusting social media. 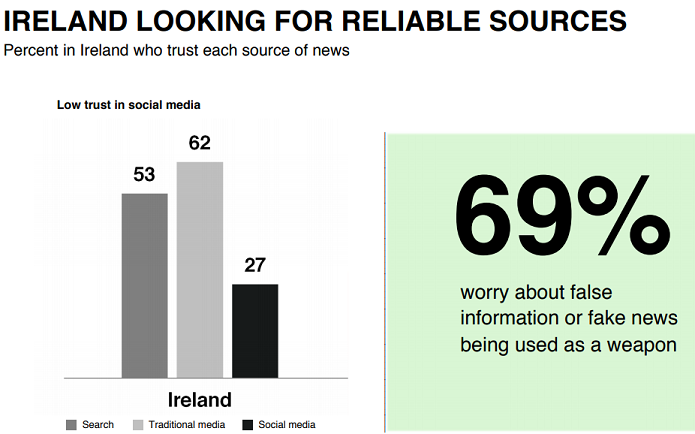 Amid ongoing political uncertainty, the Irish public has also placed increasing trust in the EU, which increased to 56%.

Orla Burke, FPRII FleishmanHillard, has been appointed to the Healthcare jury at the Eurobest Awards 2020